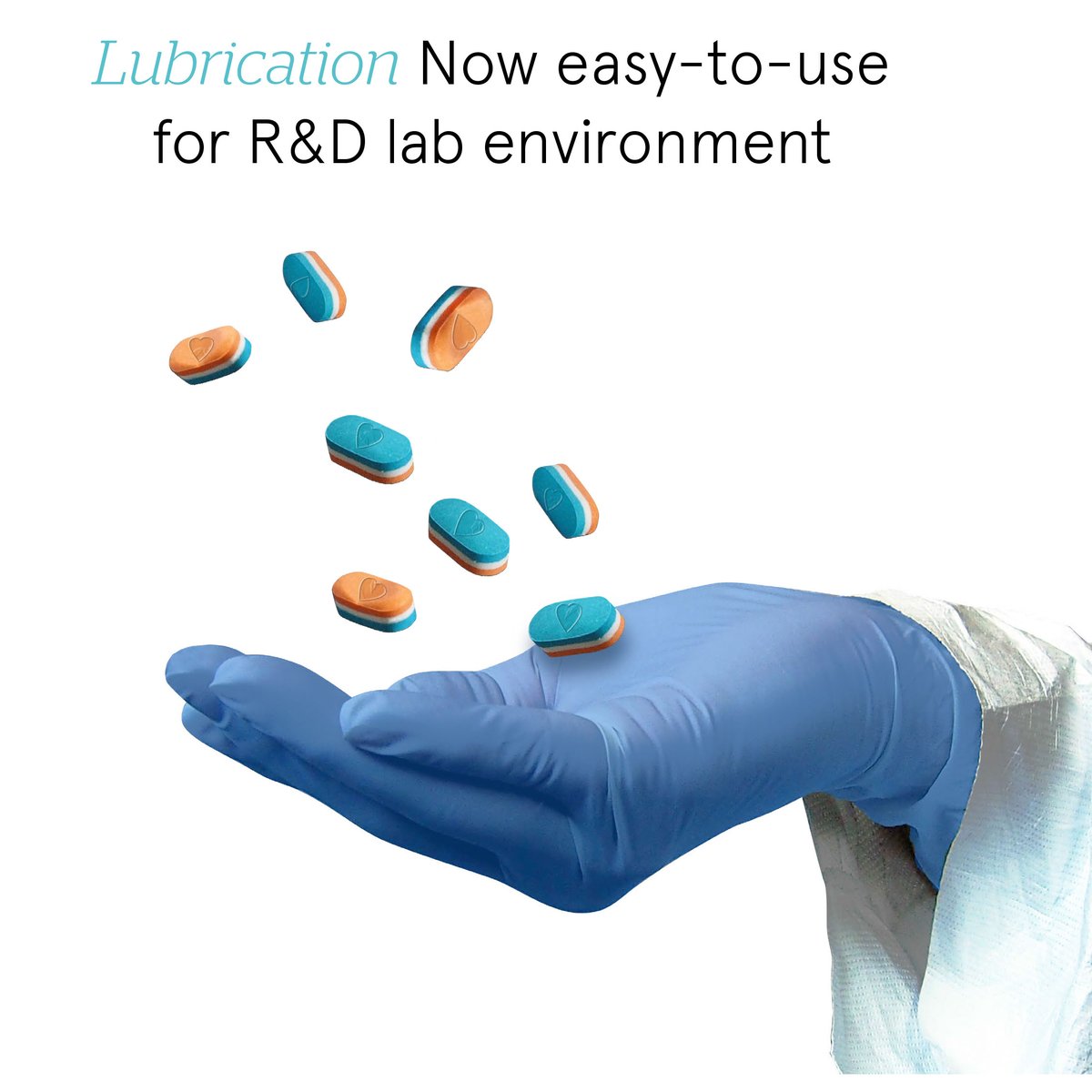 Lubricants are often required to minimize friction between a tablet surface and the die walls during the ejection phase of the compression cycle. In turn the reduced friction minimizes the wear of punches and dies and avoid that tablets are stressed and damaged when ejected from the die cavity. Besides decreasing the friction that has often been described as the true role of a lubricant, lubricants can also serve as anti-adherent and glidant.

To specifically solve sticking and flowability issues, other excipients should be used, such as talc and colloidal silicon dioxide, respectively. Lubricants are a key excipient category in solid formulations but they can also lead to loss of tablet breaking force as well as slow down of dissolution. In order to maintain ejections forces as low as possible while minimizing the negative impact on tablet hardness and dissol...

WHY DO YOU NEED TO LUBRICATE A POWDER BLEND PRIOR TO TABLETING?

Lubricants are often required to minimize friction between a tablet surface and the die walls during the ejection phase of the compression cycle. In turn the reduced friction minimizes the wear of punches and dies and avoid that tablets are stressed and damaged when ejected from the die cavity. Besides decreasing the friction that has often been described as the true role of a lubricant, lubricants can also serve as anti-adherent and glidant.

To specifically solve sticking and flowability issues, other excipients should be used, such as talc and colloidal silicon dioxide, respectively. Lubricants are a key excipient category in solid formulations but they can also lead to loss of tablet breaking force as well as slow down of dissolution. In order to maintain ejections forces as low as possible while minimizing the negative impact on tablet hardness and dissolu...

WHAT ARE THE DIFFERENT TYPES OF LUBRICANT?

The choice of the right lubricant type will depend on several factors. One of great importance is the potential interaction with the active pharmaceutical ingredient (API). For instance, the presence of MgO impurities in Magnesium Stearate can trigger chemical reactions due to the creation of alkaline conditions. Another key selection criterion is the potential influence of lubrication on disintegration time and the dissolution rate of the API. Indeed, during the blending step prior to tableting, lubricants can coat the API, interfere with its wettability and therefore lead to a decrease of dissolution rate. Magnesium stearate being highly hydrophobic could significantly impact dissolution especially when used at high concentrations and blended extensively with the API. Some lubricants, like SSF, are less hydrophobic than Magnesium Stearate and minimize the negative impact on wettability.

However, their key functionality, that is their ability to reduce ejection forces, needs to be evaluated for every formulation. The selection of the most appropriate lubricant grade as well as the evaluation of batch-to-batch variability are also critical parameters to consider. Indeed, changes in particle size distribution and specific surface area can lead to different performances of the lubricant.

ARE THERE DIFFERENT WAYS TO LUBRICATE THE TABLET?

This final blending step has to be relatively short and performed under low shear to avoid overblending and overlubrication.

External spray lubrication has already been used for a long time on rotary tablet presses. In this method the lubricant is sprayed onto the punches and the die. Companies like K-Tron Coperion have developed, in cooperation with tablet press manufacturers, feeders to precisely dose low amounts of lubricant for their external lubrication system. Pharma Spray developed by Pharma Technology Inc. (PTI) also offers a technology where the lubricant (Magnesium Stearate) is applied on the punches and dies and the excess of lubricant is removed by vacuum. In addition to the elimination of the final blending step, the external lubrication method also ensures that lower amounts of lubricant, compared to those commonly used when blended within the formulation, are homogeneously distributed between the tablet surface and the die walls. However, those external lubrication systems are often sized for production rotary tablet presses and their cost is not negligible.

ARE THOSE METHODS APPLICABLE AT THE FORMULATION DEVELOPMENT STAGE?

At the R&D level, the internal lubrication method is widely used. On single stroke presses or on more advanced presses such as compaction simulators, scientists have been using manual lubrication,mainly to characterize material properties and to avoid the negative influence of lubricants, such as reduced crushing strength or dissolution issues. However, more and more formulators are now looking at external lubrication as an alternative to internal lubrication to solve those common problems caused by lubricants.

Manual lubrication can be performed in different manners. The first consists in adding a small amount of lubricant onto the punches and the dies with a small brush and vacuuming the excess prior compression. The second option is based on the application of an organic suspension of lubricant with a cotton swab. Another technology has been recently introduced for manual lubrication, an aerosol of magnesium stearate.

MEDELPHARM Ingredient for Smooth Tableting (MIST) has been developed and launched recently to allow scientists, desiring to control the lubrication step in the early phase of formulation development, to easily lubricate the punches and the die of their compaction.

In the next phases of formulation development and to improve efficiency and turnover, some compaction simulators can also be fitted with an external spray lubrication, such as the system developed by Medelpharm for the tableting instrument, the STYL’One Evolution. A micro-dosing unit combined with a pulsed air blow cabinet is connected to the press. This enables the lubricant to be sprayed via a small nozzle onto both the upper and lower punches and onto the die walls before compression. Atomizing air pressure, spraying time and lubricant quantity can be adjusted and controlled by the ANALIS software of the STYL’One.

WHAT QUALITY ATTRIBUTES ARE ASSOCIATED WITH LUBRICATION?

The main quality attribute (QA) is the maximum or peak ejection force. This parameter is typically measured on instrumented tablet presses. The higher the ejection force, the higher the stress applied within the tablet. This stress may in turn damage the low density and weaker regions in the tablet and cause lamination and capping. Therefore ejection force has to be kept as low as possible and needs to be monitored to prevent potential problems that could occur in production.

Sticking and picking may also be the consequence of improper and insufficient lubrication. However, the assessment of these phenomena require longer production runs in order to observe a potential build-up of material on the punches over time. At the formulation development stage, the use of instrumented tablet presses allows to measure not only the peak of the force but also the entire force versus time signal. In case of “die sticking”, the ejection force signal would oscillate and the shape of this signal would become rougher than with a clean die.

Another QA that can be used to assess the efficiency of lubrication is to calculate the transmission ratio, which is defined as the ratio between the maximum upper punch force and the maximum lower punch force. When the compression is not symmetrical, that is when one punch compresses the powder while the other stays still, and when the blend is properly lubricated, this transmission ratio is commonly above 90%. Improper lubrication would result in increased friction between the powder and the die walls, in energy loss and in transmission ratios below 90%.

WHAT ARE THE BENEFITS OF USING AN INSTRUMENTED TABLET PRESS AT THE FORMULATION DEVELOPMENT STAGE?

STYL’One Evolution can measure all the quality attributes mentioned previously, while investigating the same process parameters as on a rotary tablet press Formulation scientists will therefore be able to thoroughly characterize lubricant variability as well as the influence of specific surface area and other parameters, such as particle size distribution and water content, which may be critical in the selection of the optimum lubricant.

It is also an ideal tool to economically test different compression tooling with different geometries, surface treatments or coatings that can contribute in the reduction of frictional forces and sticking. As already mentioned sticking may require long tableting runs to assess the build-up of material onto punch tips and die walls over time. However this could be investigated easily on compaction simulators by producing tablets for a long time using compression speeds mimicking the speed of large scale rotary tablet press, all this with the advantage of using relatively low amounts of powder blend, including the precious and rare API, in the early development phase.