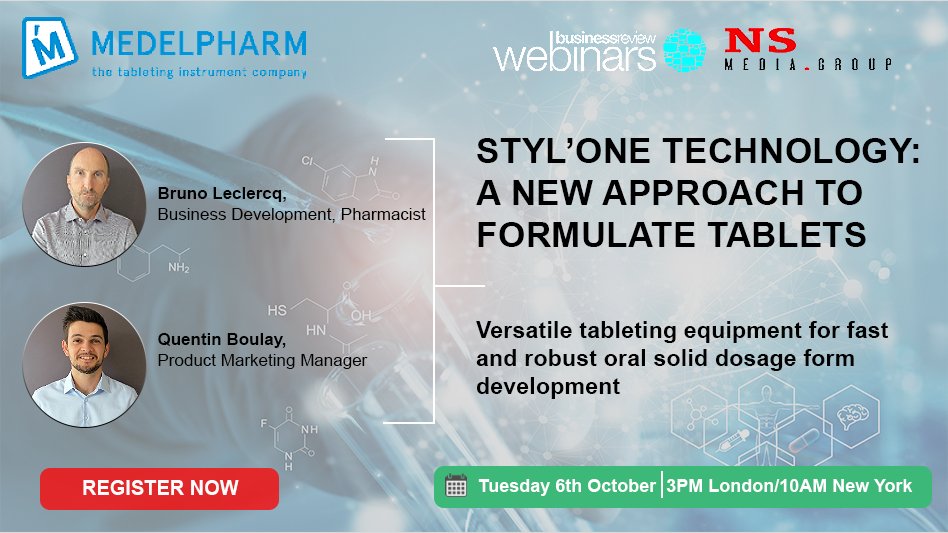 Read on the 2nd part of the transcript of MEDELPHARM's first live webinar on STYL'One technology.

The full video of the webinar is still available here, or you can take a quick glance at the Q&A transcript below.

This article is the follow up to the article "Webinar replay - Read the webinar's full transcript."

Please find here the part 1 of this article.

Read below the transcript of the Q&A session

Thank you so much, Quentin and Bruno.

Just a reminder for the audience. They can ask your questions via the Q&A widget. Just type your question and click submit. But it looks like we already have some questions coming in.

The first one is: “You mentioned that STYL’One could solve lamination issues, but how?

I will answer that question. There are a different ways to look at a lamination issue.

First of all, if you have a problem in production. Then, you can take your part for production. Take a small amount go on the STYL’One. And then the first will be to look at the compactability to try to replicate the problem you've seen in production.

If you can pick out the problem in production, you have different ways.

You can for example decrease the speed of compaction and see what is the maximum speed you can use in production before you get to lamination.

Or, and that’s because it’s some work that we have done in the lab: instead of using a normal straight die using a tapered die and see if the tapered die can actually resolve your issue.

Those are just a few elements of some of the work that could be done on STYL’One to look at lamination issues.

Thank you so much for your answer.

And now the next question is: “I work with big size tablets for dishwashing application. Is it possible to perform the development on STYL’One?

I will reply to this question.

Yes, of course it is possible. The main application of the STYL’One is in the pharmaceutical industry with smaller tablets, but we can accommodate bigger size tooling, up to 40 millimeter diameter for dishwashing application, but also veterinary for example.

We can increase the feeding depths as well to make a thicker tablets. But you have to also understand that if you increase the size of your tablet, you will need most likely higher force applied, in order to get the required pressure on your compact. The standard STYL’One Evo can go up to 50 Kilo-Newton and we can upgrade it up to 80 Kilo newton if needed.

The main application of the STYL’One is in the pharmaceutical industry with smaller tablets, but we can accommodate bigger size tooling, up to 40 millimeter diameter for dishwashing application, but also veterinary for example.
Quentin Boulay - MEDELPHARM

Thank you so much Quentin. Now, onto the third question today: “Feeding has always been a challenge in R&D, especially when dealing with mini tablets. Do you have a solution for better weight consistency?”

Yes, the main window flowability is one thing which can be critical, especially when you deal with small tablets.

And this has been a challenge for many formulators. What we have done to try to answer that question, was to actually develop a special force feeder where the paddle is actually flushed with the die table. This will actually allow, constant feeding of the dock.

We have actually done some work in the lab where we managed to feed a mini tip. The tip was, if I remember well 2.5 millimeter, and we got good and consistent tablet weight.

One thing that I wanted to add at this stage is that the STYL’One is a compaction simulator and we mimic pretty well the compaction behavior.

But we are not saying that we are mimicking the feeding of production press. Why? Because the feeder we use is small compared to the kind of feeder you may find on the production equipment.

Thank you so much for that answer. Just the quick reminder to the audience. If you want to ask any questions, please submit them via the questions widget. On to the next question.

Yes. In the examples we’ve showed you today, we had to choose some case studies (obviously we couldn’t show you other case study because of time)

But we also have done some work in the lab where we actually look at testing external lubrication.

And this actually could be done by a device that we have developed. This device is an external lubrication box that is plugged into the STYL’One. It allows you to actually spray a small amount of lubricant to the upper punch, the lower punch and the die before feeding the die.

Can you also assess external lubrication on a STYL’One?
STYL'One webinar - Q&A session

Therefore the answer is “Yes, we can do that!”

And if you want to test the feasibility of external lubrication, this might be an interesting method. By the way, we sometimes also use external lubrication when we want to do characterization on some material because in that case you don't want any lubricant to be in your formulation that could modify or affect your tabletability.

The next question: ”Please how do you make ribbons? Elongated punches?”

For roller compaction, we have what we call a special modular special package called the RoCo pack. And this RoCo pack contains a software (that we did show you on one of the screen) to actually make the ribbons.

But we also have elongated punch (10 by 20), which kind of mimics the kind of ribbons you find in on a roller compactor.

But we clearly know that the ribbons that we’ll produce with this elongated punch are not exactly similar to what you find on a roller compactor. But some of the studies that were performed by the University of Dusseldorf by a PhD student called Hannah Lou has been showing that that we get similar results between the work has been done on the STYL’One and the work done on a roller compactor like the Gerteis.

The most common kind of tooling used in production like the B tooling, the BB or the D tooling can be used on the STYL’One Evo.
Bruno Leclercq - MEDELPHARM

Thank you so much for the answer.

Our next question is: “Can the rotary tooling punches be used in the Evo?”

The answer is “Yes”.

The most common kind of tooling used in production like the B tooling, the BB or the D tooling can be used on the STYL’One Evo.

For example, if you have a problem in production of a formulation with a specific tool. Very often you’ll take this tool and go on the STYL’One Evolution and mimic your press profile.

It has to be said that some very specialized tooling developed by manufacturers, sometimes cannot be fitted on the STYL’One. But that's not very often. For the standard tooling B & D, that's not an issue at all.

Can I please remind the audience that they can still submit their questions to the Q&A widget?

Our next question is: “Is the STYL’One allowing calculation of tensile strength, knowing tablet size and shape?”

Yes. In the presentation we’ve made, we showed harness versus compaction forces. That’s because we just decided to choose one kind of graphical representation.

Thank you so much for that answer. Our next question is:”Any reason why hardness instead of tensile strength referring to USP <1062>?

Like I was saying, the reason is that for this presentation we choose to show one sort of graph. We didn't have enough time and space to put multiple graphs, so we had to choose one. But we could have chosen the tensile strength too.

And we believed it was easier to understand the hardness. But it's important to know that the softwares on the STYL’One Evo and the Nano are USP <1062> ready.

So you have all the recommended graphs, the tabletability, compactibility, compressibility, manufacturability…, you can access the SRS…. It has been designed to match with this monograph.

It is important to know that the softwares on the STYL’One Evo and the Nano are USP <1062> ready.
Quentin Boulay - MEDELPHARM

Thank you so much Quentin and Bruno.

Our next question is: “How much material is needed for using the STYL’One unit?”

That's actually a very good question. There could be different answers to that.

. You actually don't need to use the feeding shoe, but you can basically feed up by hand.

And therefore the amount of product to produce a tab will actually be the weight you’re you're targeting! If you actually want to use a feeder or a forced-feeder, in that case we are more talking of a higher quantity. It could be between 50 and 100 grams.

Thank you. Just a quick reminder to the audience. If you want to submit your questions, you can do so via the Q&A widget. Just type them into the box and click submit.

Our next question is:  “Why do you use lower punch force and not the average between upper punch and lower punch? Thanks”

Thank you so much again, and our next question for today is: “What value is acceptable for an ejection force?”

Obviously, for the ejection force you cannot actually give a value like that. It actually depends on the size of the tablet.

It depends on the surface of contact between the tablet and the die during ejection. I would say some people are saying that you should not go above 5 % of the maximum compaction force you're using.

Thank you so much for your answer.

Our next question is: “Can you use the STYL’One roller compactor simulator to prepare two kilograms of ribbons for small batch preparations?”

The answer is: “it’s always possible”. But if you do so it might take a lot of time… The answer is “yes, but it may take hours.”

Okay, thank you so much for your answer.

Our next question is: “Do you have the technical data and dimensions for most of the popular tablet press models in the market? Which dimensions are critical to have to execute a successful compression simulation?”

To answer that question… In our software, we have a database of tablet presses from a different suppliers (suppliers from Europe, from the US, and for also from Asia).

Okay, thank you so much.

Up to next question: “I see the STYL’One on a small table. How heavy is it?  Does it not vibrate?”

The STYL’One you see on the small table is our latest product which is the STYL’One Nano. And the STYL’One Nano has a weight of 250 kilograms. It could be placed on a table. Those tables have been specially designed for this product. There's no specific vibration.

I'm afraid that's all the time we have for today. So it just leaves me to thank our speakers Bruno and Quentin and to MEDELPHARM for supporting the session.

We look forward to sharing for the webinar sequel, so please do keep an eye out on the website just mentioned and follow us on Twitter @brwebinars for daily updates and join our LinkedIn group “Business review webinars”.

Thank you once again, and I hope you all have a nice day.

Go to part 1 of this article
Dry Granulation a material sparing method
Containment is a growing demand in R&D tableting equipment
Webinar: R&D of Mini-tablets on STYL'One Evo
Webinar: External Lubrication, how to mitigate the impact of...