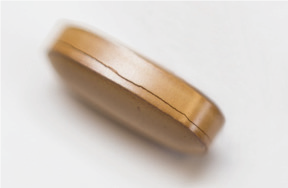 Lamination & capping often occur during scale-up and are main issues in our industry. Capping is the partial or complete removal of the crown of a tablet from the main body, while lamination is the separation of a tablet into two or more distinct layers. However, those 2 phenomenon share similar causes...

What are the most common tablet deffects?

There are numerous tablet defects: chipping, picking & sticking, cracking, lamination & capping to name a few. Lamination & capping often occur during scale-up and are main issues in our industry. Capping is the partial or complete removal of the crown of a tablet from the main body, while lamination is the separation of a tablet into two or more distinct layers [1]. However, those 2 phenomenon share similar causes and we will not enter into much more details in this article.

It is a common hurdle in tabletting which is not generally observed during the R&D development phase. One of the reasons lie in the high production speeds on industrial rotary presses, speeds that are not generally seen on conventional R&D tablet presses. This explains why capping or lamination is sometimes only discovered during scale-up. It is therefore essential to try to identify those issues at the very early stage of development to avoid any extra costs in the development process.

How do you typically solve capping or lamination issues in development?

If capping occurs during development, the formulator will typically look at modifying the manufacturing process by adding a granulation step or changing the formulation by adding excipients that are known to reduce capping such as low substituted hydropropylcellulose (L-HPC). As per Shin-Etsu technical literature, “one of the benefits of L-HPC is to resolve capping which is a typical problem in the tableting process

How do you typically solve capping or lamination issues in production?

Once the formulation has been set and transferred to production, solving capping or lamination can only be done by changing process parameters. Materialscience physicists propose to solve capping by identifying the stresses (tablet design, fast ejection phase, J-hook on punch tips …) at the origin of the mechanical failures and by overcoming the lack of cohesion [2]. Therefore, the goal is to pinpoint and prevent the formation of those failures and to increase the cohesion (the tablet “hardness”). Air entrapment is a common source of internal micro-factures. After the compression event, it is believed that air bubbles tend to regain their initial sizes and create micro-factures.  Adding pre-compression and/or using tapered dies favour air removal from the powder bed. To be efficient, the zone where the compression takes place shall be partially or completely in the tapered zone.

However, this option has a serious drawback as it might also decrease tablet cohesion, which is counterproductive. At this stage of drug development, the lack of cohesion cannot be achieved by changing the formulation anymore. Longer dwell time on the pre and/or main compression can have an effect on particles rearrangement to increase the cohesion. Some rotary press manufacturers propose a longer dwell time on the pre- and main compression rolls to reduce capping.

Others suggest to have a larger head-flat to increase the dwell time. Increasing cohesion can also be achieved by increasing the blend moisture content, water being a great plasticizer.

Can capping or lamination be predicted?

Tabletability plots are generally a good way to identify tendency to capping. When the compression pressure increases, the tensile strength increases and may level off or even may drop. This is very often a sign of lamination due to excess of force applied. The formulation scientist should therefore select a compression force range that is on the almost linear part of the plot and away from the plateau.

Quantifying the mechanical failures is not easy and a visual inspection of the tablets after the hardness tester is necessary. Another way is to stress the tablets into a friability tester and visually inspect the tablets to look for failures.

Tools have been developed on premium R&D tableting instruments to help formulation scientists, including accurate measurements of full ejection signal, radial stress and elasticity recovery. The entire curve of the ejection force signal gives valuable information on any potential die binding (die tightening), not only the peak of the ejection force.

In-die radial stress is another tool to predict tablet failures. High residual radial stress (also known as die wall pressure) in the die can yield to high radial elastic recovery that occurs when the tablet starts to come out of the die.

The axial elastic recovery can be computed thanks to the in-die compression thickness. The higher the axial recovery, the higher the tendency to capping. Measuring the elastic recovery after 24h storage can also give hints of potential capping occurring after a certain period of time. Another approach is to look at the work of the force during decompression, a physical value sometimes called elastic energy.

STYL’One Tableting Instrument is perfectly suited to run tests to identify and possibility solve capping & lamination. Its premium instrumentation with high frequency of acquisition are ideal to analyse the ejection profile to detect ejection peak or die friction (die tightening). The micron-accuracy position sensors allow a precise measurement of in-die tablet thickness, a key parameter to assess the elastic recovery.

Last but not least, STYL’One features high velocity compaction profiles, hence mimicking the high strain rates linked to large tablet outputs of commercial-size rotary tablet presses. This is an essential feature to be able to replicate the compression dynamics of production presses

at lab scale, thus being able to see tablets defects such as capping or lamination at early stage.

Do you have an example of solving a tablet defect?

A contract development and manufacturing organization (CDMO) encountered important tablet failures during production. A considerable amount of tablets presented cracks along the tablet belly band and also at the upper tablet surface.

Different pre-compression ratios as well as lower turret rotation speeds were tested on site but tablet defects were still present.

On a STYL’One compaction simulator, using the final blend, the production tooling provided by the CDMO and identical setting as in production, the tablet failures were reproduced at lab scale

First, different compression zone configurations were tested (symmetric and asymmetric compression) and failed to resolve the problem. Straight dies were replaced by a tapered dies [3] since air entrapment and elastic recovery during decompression were suspected to be the main causes. A tapered die has the upper part of the die bore slightly wider than the cylindrical part. For a symmetric compression, cracks and laminations (figure 2) were still present on tablets. However, adjusting the upper punch penetration to 3 mm to compress entirely in the tapered zone and to obtain an asymmetric configuration, it led to perfect tablets without any failures.

The compression force could be even increased up to 30 kN (from 16kN) without any risk of tablet stress cracks appearance, even without the need of reducing the turret rotation speed. Results were immediately implemented at customer’s site. They could therefore maintain high production output without tablet defects. Cost saving were astronomic.